They are both 51 years old. They are both extremely successful actors with numerous awards to their names their backs, Oscar nominations and more than titles galore in their filmographies. They are known the world over. They are Nicolas Cage and Johnny Depp. 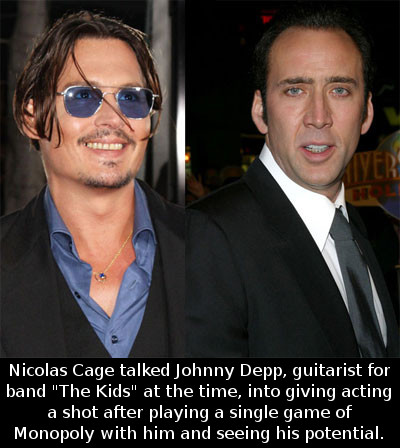 Born in Long Beach, California, US, in the family of the famous director Francis Ford Coppola, Cage landed his very first role as an actor when he was only 17 years old. Cage’s first role came in 1981 in the TV movie Best of Times. Two years later he already had 4 titles behind him and he met Johnny Depp, who was 21 years old and just an unknown kid from Florida, who played his guitar and jammed with his friends. In 1983 Cage and Depp played a single game of Monopoly, which was more than enough to convince Cage that his new friend was going to become a great actor. He managed to convince Depp that he should give it a try and sent him to his own agent.
That year Depp landed his very first role as an actor in A Nightmare on Elm Street.