This man definitely has to be one of the unluckiest people in the world.

According to official reports, a winning Powerball jackpot ticket for the California Lottery was purchased back in September 2014. The winner was set to receive $1,098,624, but he didn’t get the chance to do so, since he lost his ticket. 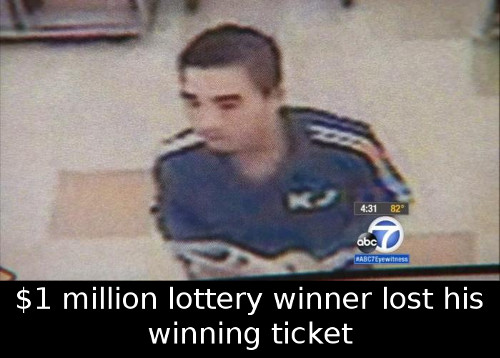 The man in question had bought the ticket from a local supermarket in Rosemead, California, and the local media released a video footage from the surveillance cameras in the supermarket, which showed the winner’s face. He contacted the lottery officials shortly after he saw his face on the news and said that he had lost the winning ticket. The officials gave him a 180 day long deadline to find the ticket and collect his $1 million prize. The man failed to do so, so the lottery decided to put the money to good use by donating them to the public schools in the state. The lottery also allowed the supermarket, from which the winning ticket was bought, to collect a total of $5,493 as a bonus for being the ones to sell the ticket.

For the past 30 years a total of $800 million from the winning California Lottery tickets has gone unclaimed. Furthermore, between 2013 and 2014 only nearly $20 million have gone unclaimed!