A decade ago Jesse Ronnebaum invested 50 cents in a painting he found at a yard sale. Today this painting could be worth $10,000.

The piece of art portrays seven men lined in a row and posing on a pool table with their pool sticks. Jesse thought it looked good, so he parted with the 50 cents and went back home to hand his new painting on his wall. 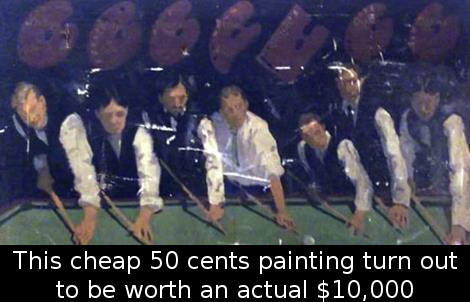 Little did he know he had actually bought an authentic 100 year old work of art. Just last week the man, who lives in Batesville, Indiana, US, noticed that there was a mark on the bottom of the painting, which read “Palette and Chisel Club 1910”, meaning it was painted by artists from the Palette and Chisel Academy for Fine Arts in Chicago, Illinois, a century ago. Now the painting is being properly restored and it’s expected that it will be auctioned. According to official reports, it might make it to $10,000. Jesse told the local media that he had spent years struggling to pay his bills without knowing that he had several thousand dollars literally hanging over his head the whole time.

Experts claim that if the painting was created by a single artist from the Palette and Chisel Club, the piece could have been worth hundreds of thousands! And yet, for a 50 cent investment from Ronnebaum, $10,000 doesn’t sound too bad.