You probably didn’t know it, but koalas, those cute furry marsupial creatures, have almost identical fingerprints to human ones.
Many animals, such as gorillas, also have fingerprints, which have formed millions of years ago. However, the prints on koalas’ fingers have most likely developed recently, since other animals close to koalas, like kangaroos or wombats, for example, don’t have fingerprints. 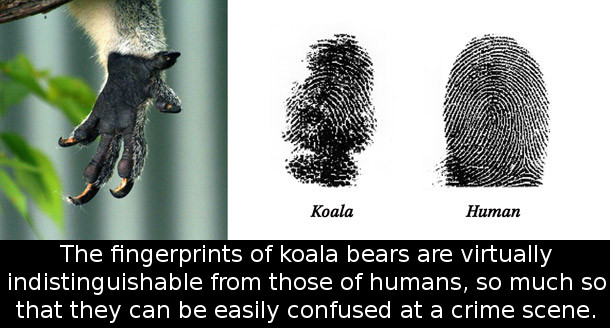 The dermatoglyphes on koalas’ fingers were discovered back in 1996 by a team of Australian anatomists. Thanks to this discovery, there’s a strong explanation to why primates and even humans have fingertips, while so many other living creatures don’t. Koalas feed on eucalyptus by climbing the trees and grasping the branches. They also need to have a strong grasp on the leaves in order to tear them apart and eat them, just like monkeys and humans need to have a strong grasp in order to feed and perform more complex activities. According to the experts, the fingerprints, which are basically relief formations on our skin, serve as a biomechanical adaptation to the need of grasping and produce a fine control over static pressures, movement and grasping. Since we, humans, grasp, we need our fingerprints to help us get a hold of something easily, just like koalas.

It’s crazy, however, that the fingerprints of these marsupial creatures are almost identical to our own. In fact, they are so close, that they can’t be distinguished even by the most qualified experts!