Kate Archibald, a 20 year old student at the University of Aberdeen, gained so much weight that she went 3 sizes up during her first year at university. The unusual thing is that Kate gained weight not by eating too much, but by eating too much in her sleep. 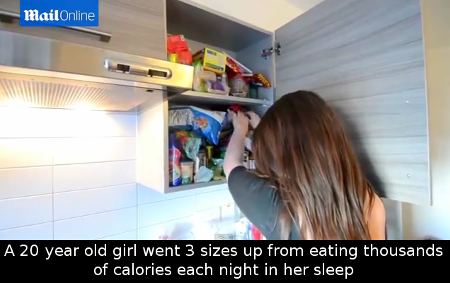 The student was having numerous fights with her roommates over great amount of food going missing from their fridge all the time. Kate realized the missing food was actually going into her stomach each night shortly after she woke up next to empty chocolate bars wrappers. Right after that she went to see a doctor and was diagnosed with a syndrome called Nocturnal Eating Disorder. She developed it as a side effect of her ADHD medications. Kate’s night snacks have caused her to gain serious weight in just one year. She has managed to swallow the whopping four portions of calorie-ridden spaghetti Bolognese as well as a toast – all of which in a single night! Regardless of how much she has eaten throughout the day, her body simply believes it is hungry during the night.
Kate doesn’t see her condition as an eating disorder, but rather like a parasomnia – an abnormal sleeping disorder.