One restaurant chain in Singapore is offering its customers an unusual futuristic sci-fi experience they won’t get anywhere else in the world – at least for now.

Timbre, a restaurant chain in Singapore, has been gearing up with flying drones in an attempt to fight back the local problem regarding the labor force shortage in the city-state. 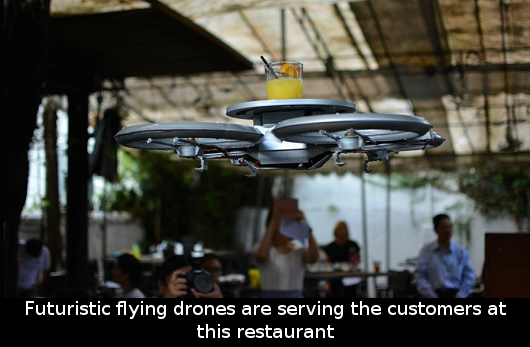 The drones, which look absolutely futuristic and as if they’ve flown straight out of a high-tech Sci-Fi blockbuster, are serving as waiters. The machines can store up to 2kg each, which basically means they can carry a full tray to a customer’s table without breaking a sweat. The autonomous machines take the food to the table, where an actual waiter serves the customers. However, the drones deliver the order faster and safer than a human waiter, which is the main reason Timbre has stocked up on them.
Ever since the manpower shortage broke out on the island, many restaurants and bars have been forced to close down thanks to not being able to find enough staff members to keep the business alive. Fortunately, Timbre doesn’t seem to have such a problem thanks to the drones. The managing director of the chain, Edward Chia, stated that he doesn’t see the “employment” of the machines as a way to replace manpower and human staff, but as a way to keep the business alive and ease the stress of the busy working hours for the staff members.