Back in the not so distant 2006 a team of scientists retrieved a quahog clam from the North Atlantic near Iceland. The clam was placed in a freezer – which is a normal practice – before it was transported to the researchers’ lab.

Unfortunately, by the time they started the dating process, which would reveal the clam’s age, the creature was already dead. 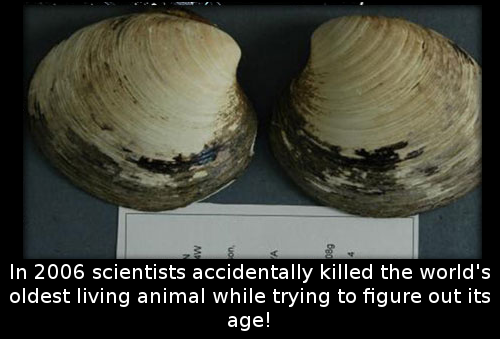 The scientists decided to cut it in half and count the layers of its shell from the tiny hinge, which connects the two parts of the shell, since it’s usually the best way to tell a clam’s age. They thought the creature was 405 years old, because the hinge had 405 lines formed from each layer growing over the original shell each year. They published their finding and named the clam Ming – a reference to the Chinese Ming dynasty that started their ruling when the clam was born. However, it turned out they were wrong. Through time some of the lines on the hinge had compressed. Thus, when the scientists counted the layers on the both shells, they discovered there were more lines making the clam 507 years old.
The new results were published a couple years ago and the team stated that they were absolutely positive about Ming’s newly discovered age. The creature could have probably been alive even nowadays if they had left it on the bottom of the ocean.