For the past few decades Eminem has become one of the most praised rappers of our time. With tons of awards on his belt – from 15 Grammys to 8 AMAs and even to an Academy Award, Marshall Mathers’ songs are absolute hits.

One of his latest singles, Rap God, was released back in late 2013. 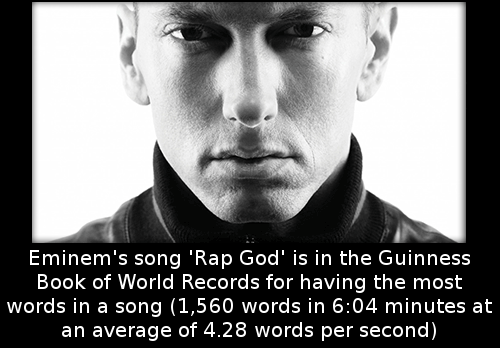 It was mostly positively reviewed by numerous critics and Eminem’s lyrical skills as well as rapping speed were absolutely praised. The single was nominated for a Grammy, WMA and VMA. It won the latter. The song even reached #1 on the weekly UK RnB chart. Not only that, but it also made it to the Guinness Book of World Records, since it has the largest word count any song has ever had – a total of 1,560. The song is 6:04 minutes long, which means the average word count per second is 4.28. There’s a fragment of the song, during which Eminem raps a total of 97 words in just 15 seconds with a speed of 6.5 words per a single second. This incredible achievement is described by Eminem himself as “supersonic speed”.