Lightning bolts can be scary. Given the fact that they are electrically charged flashes and they travel at impossibly high speeds, the possibility that you can get hit by a lightning is quite horrifying.

And if you’re daily job requires you to spend great amounts of time in the outdoors, yours chances of getting struck are even higher than most people’s ones. 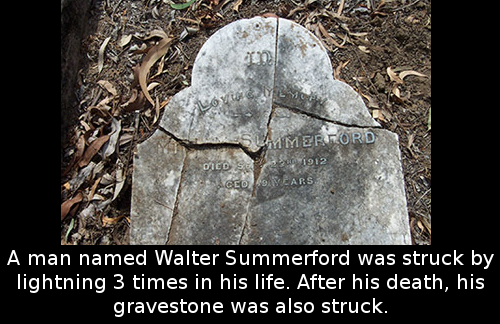 Take this guy for example. Back in the distant 1916 a lightning bolt struck the grave of Walter Summerford. Mr. Summerford died 4 years before his gravestone was struck and during his lifespan he himself was struck by a lightning a total of 3 whopping times!

Official reports show that he was a sportsman, meaning his profession increased his chances of getting hit. However, Summerford didn’t have it nearly as bad as Roy Sullivan. Sullivan, who was an American forest ranger, got hit a total of 7 times during his lifetime.

He even got into the Guinness Book of World Records as the man, who was struck by lightning bolts more times than any other person on the planet. He died at the age of 71 back in 1983.