50 years ago, being blind or deaf put you at a large disadvantage. However, nowadays, new technology, as well as better equality towards anyone with a disability means that how you may have been treated then, no longer happens now. Well, it didn’t until yesterday. 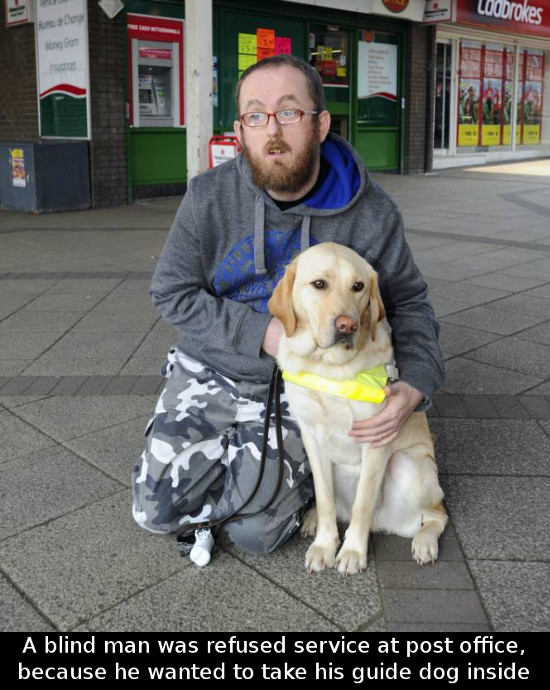 If we go into a shop, pretty much anywhere in the country, it’s likely there will be a sign on the door saying no dogs, except guide dogs. However, even guide dogs weren’t allowed in one post office in Manchester. Craig Roberts is blind, and so needs his guide dog, a Golden Labrador Retriever, to help him out and about. However, he was a bit stuck after he was told he couldn’t be served with his dog with him. It’s said that he had to argue for over 10 minutes, before they would allow him to be helped.

“This incident has really knocked my confidence and made me think if I can’t take Bruce to the Post Office, will this happened again at the shops or a café? It was really embarrassing and humiliating.”

Craig Roberts wasn’t the only one to question this absurdity, as other customers also commented to the employee about not being able to have his guide dog.

However, the employee would’ve got into some kind of trouble, as it’s actually a law in the Equality Act 2010, that anyone with a disability is treated totally equally. As they may need a guide dog to help them, they must be allowed into shops, and other public places, along with their owner.


The Post Office in question has apologised to Craig Roberts, and he’s been asked to return there to talk with the postmaster, but Roberts would also like a written apology.