Whilst the public were deeply saddened by the loss of Paul Walker, from the car crash, we are losing a great actor. We were in no way hurt as much by this, as his family and close friends have been. Walker’s co-star Vin Diesel, was also a great, long friend of Walker’s and it is sure to have hit him especially hard, as he will no longer have him on set beside him. 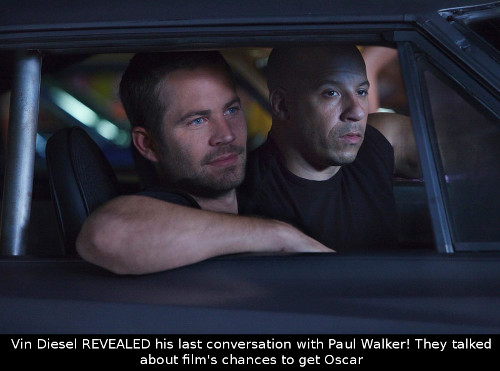 In an interview with ‘Variety’, Vin Diesel has revealed a lot about his last time with Walker, which happened on the Fast & Furious set, a few days before the accident occurred. They were filming a dramatic scene, whereby Vin Diesel (Dominic Toretto) risks his life to save many other lives, among those, Walker (Brian O’Conner).

Diesel told of how with these types of films being so dangerous, how Paul Walker would react if he were to die. Diesel said that after a discussion in their trailers about death, his closing thoughts were that if he died, Diesel wanted Walker to share with everyone how much of brothers they had been.

It was only a few days later than Walker and his friend Roger Rodas, whilst driving in Valencia, California, they hit a tree at an extremely fast speed, and neither of them survived this terrible accident.

It was said that Diesel had a particularly difficult time resuming work on set, and that he has thought over and over about their final conversation the few days earlier. Since the accident, Diesel named his new daughter Pauline, in honor of Paul.


With regards to the movie, the production team, and his co-stars wanted to find a good way to finish the film in a decent way, which turned out to be Walker’s brothers helping to finish the few remaining scenes.

Diesel has also talked about the potential success with awards, and he has said:

It will probably win best picture at the Oscars – unless the Oscars don’t want to be relevant.

It is unlikely that such a movie will win such awards at the Oscars, or Academy Awards like Diesel claims it might, but it is undoubtedly going to have massive success with it potentially setting a new record for series sales for box office, as well as potentially receiving the record for largest number of tickets sold in April. Apart from the die hard fans of this movie series, it is expected it will be boosted by the large number of people who want to see how well Universal Studios have managed to finish filming the remaining scenes. I know I’m looking forward to seeing how good it is!

The final film in this series is amazing, and hopefully a fitting tribute to the late Paul Walker.