Karen Raymond, a 49 year old woman from Devon, UK, got her pet kitten Scruffy when he was only eight weeks old. In 2007 he went missing and Karen never saw him again. Up until now.

Karen was coming back from the hospital after a knee surgery when she saw her long lost cat waiting for her in front of her doorstep. 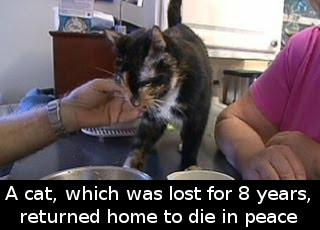 She claims she recognized him immediately, although her husband wasn’t sure if it was indeed their cat. The woman says that Scruffy was looking miserable and think, but he was indeed the loving cat she once knew. Karen decided to take Scruffy to the vet, because she thought his unhealthy and wretched looks didn’t mean anything good. It turned out the feline fur ball was actually suffering from mouth tumor and the vet offered to put him to sleep. However, Karen wasn’t up for it.

She took Scruffy back home and started caring for him again. Three days after he turned up Scruffy was already looking more like his old self and less like a miserable homeless kitten. Karen is convinced Scruffy has returned home to die in peace, although cats usually run away when they sense their time is nearing.