In order to spot even the tiniest hint of such alien life, the NASA team came up with a special color chart. NASA is supporting the possibility that aliens might exist on distant planets. Lisa Kaltenegger, the director of the Cornell University and a professor of astronomy, states that the microbial life here on Earth dominates in the history of living creatures found on our planet. In fact, there’s a popular theory, which suggests that every living thing on our planet has evolved from a microbe. In other words, Kaltenegger states that multicellular creatures (such as us, humans) have evolved from single-cellular creatures – microbes. Thus, she, as well as a team of NASA scientists, believes that there might be alien life on other planets. 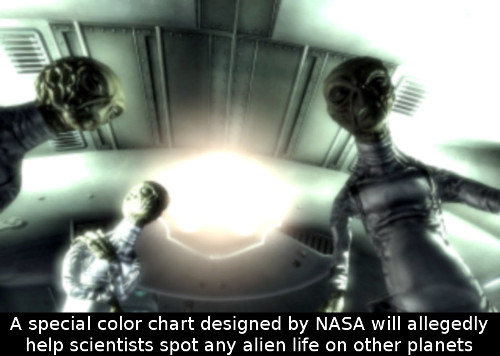 The chart represents the reflection “signatures” microscopes pick up from a large variety of bacteria found on Earth. The color table shows the 8 basic colors different types of bacteria channel towards microscope lenses. The bacteria were picked up from all around our planet, even from the most harsh and inhospitable places. According to Kaltenegger, microbes found in these places might already exist on other planets and might be the kickstarter for a new alien form of life on distant planets.

The color chart will help telescopes spot such bacteria in outer space, even if the planet isn’t close to Earth. The scientists are hoping that the chart will help them spot any form of alien life. Unfortunately, we will have to wait for the next generation of more complex and high tech telescopes to use the color chart. Up until then, we have tons of reports of UFO sightings to read about – after all, people tend to believe aliens have come to our planet on almost daily basis.