An African Grey parrot by the name of Alex was the first and only animal to ever have asked an existential question.
Alex was only about a year old when he was bought from a pet shop by a woman named Irene Pepperberg. He was the subject of an experiment that lasted from 1977 to 2007. The experiment started at the University of Arizona and led to Harvard and Brandeis University. 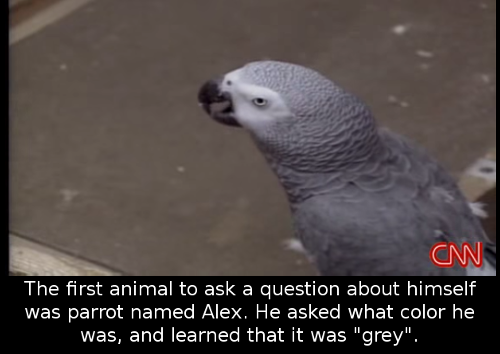 Before the experiment with Alex began, it was believed by scientists that the large brain of a primate was needed in order to handle complicated problems that related to understanding and language. Birds were not considered as intelligent because their only commonly known use of communication was mimicking and repeating sounds to interact with one another.
But, Alex’s acheivements supported the idea that birds could in fact reason on a basic level and creatively use words. Irene Pepperberg wrote that the intelligence of Alex was on a level of dolphins and great apes. Also, she said that Alex had the mindset of a five year old human being and did not even reach his whole learning capacity by the time he passed away. The bird was reported to have emotional feelings equal to a two year old human at the time he died.

Pepperberg said that Alex could recognize 50 different objects and quantities up to six. He could also grasp the concept of “bigger”, “smaller”, “same”, and “different”. He was in the process of learning “over” and “under”. Alex showed emotions like surprise and anger when he was confronted with an object that was non existent or something different than what he believed was hidden during certain tests.

Alex’s vocabulary was one of over 100 words, but what was even more exceptional was that he seemed as if he really understood what he was saying. When he was shown an object, he was asked about its color, shape or material and he could properly label it. He asked what color he was and learned that it was “grey” after being told six times. This is what made him the first and only non human animal to accomplish asking an existential question. Apes are trained to use sign language and have not yet accomplished this task.