Five year old tend to have an extremely vivid imagination. And yet, this kid’s story is far more complex than a case of an imaginary friend.

When Ryan Hammons was only 4 years old, he started having unpleasant and vivid nightmares, which started haunting him. A year later, when the boy turned 5, he decided to hell his mom Cyndi something extremely shocking – that he was the reincarnation of a late Hollywood actor. 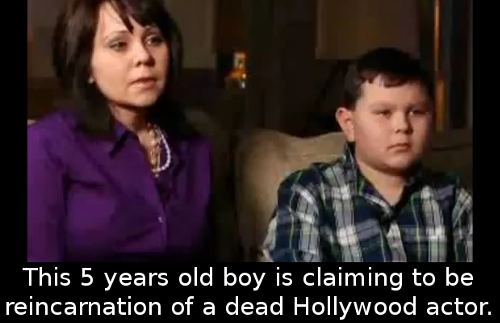 Cyndi, who lives with her family in Muskogee, Oklahoma, thought that her son wasn’t just going through a phase of vivid childhood imagination, since he was able to recall absolutely stunning facts about his alleged past life. He talked about how he traveled the globe, danced on Broadway, starred alongside Rita Hayworth, and all sorts of other activities. Ryan was extremely detailed in his descriptions and his mother found a picture of the actor his son was claiming he was once was. They found his photograph in an old memorial book and shortly after that learned that he was called Marty Martyn. Martyn starred in a Hollywood production called Night After Night back in 1932 and was an extra without any lines. He later retired from his acting career and started working as a Hollywood agent up until he died in 1964.

Ryan’s remarkable descriptions and details of Martyn’s life stunned even the psychologist his mom turned towards in an attempt to seek help for her son’s claims. Dr. Jim Tucker, the psychologist in question, who’s working at the University of Virginia, claims that Ryan’s story can neither be written off as a fable, nor explained as some normal thing. The fact that he was able to give such thorough descriptions of an unknown actor’s life was shocking even for Dr. Tucker.