The twin sisters Kyrie and Brielle Jackson were born 12 weeks prematurely on October 17th, 1995. Since, the two babies were too fragile and still underdeveloped they were placed inside two separate incubators at the neonatal intensive care unit at the medical center in Worcester, Massachusetts. It was a common procedure at the time to split up newborns in order to protect them from a variety of infections. 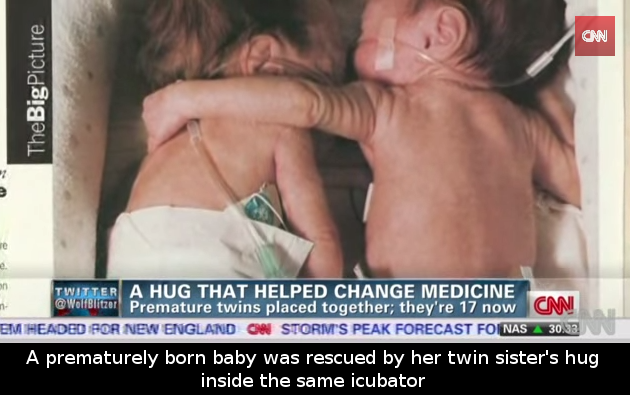 The condition of Kyrie was stable and she weighed 2lbs 3oz before starting to gradually gain more weight. Unfortunately, he twin sister was not doing so well. Brielle was suffering from cardiac problems and could not breathe properly which resulted in a very small weight gain.  Almost a month after the twins were born the respiratory and cardiac functions of Brielle stopped working. She was in a critical condition.

Luckily, nurse Gayle Kasparian who looked after the newborns in the intensive care unit came to the rescue. She attempted reviving Brielle with all known medicines at the time, but with no result. After asking for the parents approval she decided to proceed with a practice that was absolutely unknown in the US at the time. She placed the healthier Kyrie next to her sister Brielle inside one single incubator. As time passed both twin sisters snuggled tightly together as they slept in front of the eyes of their terrified parents.Kyrie even hugged her sister with her tiny little left arm.  Surprisingly for all withing minutes the condition of Brielle improved drastically and her condition stabilized.

Both twins are currently 18-years-old and are about to enroll in college. Their famous photograph was dubbed “The Rescue Hug” and they are popular even today.