Home » Did you know that A girl dumped boyfriend as April Fool’s joke, but the….

We all look forward to checking out the internet to see what pranks big corporate companies have played on us, and some of us even enjoy doing our own pranks on other people. But we don’t expect what happens next…

A 17 year old girl called Hayleigh McBay from Scotland decided to play a rather cruel prank on her boyfriend as her prank. On WhatsApp she decided to tell him that she wanted to break up with him. 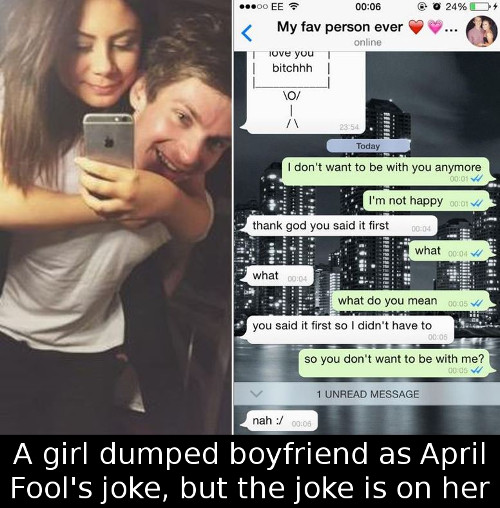 “I don’t want to be with you anymore. I’m not happy.

However, what she wasn’t expecting, is that he saw right through this and he decided to take her along for a ride.

Instead of him being upset, like she had expected him to be, he told her that he was glad they were breaking up.

“Thank god you said it first,

Fortunately for Hayleigh, he was just taking advantage of this situation, and he’d decided to have some fun with her about it!

After McBay tweeted a picture of their conversation and saying how her April Fools had backfired, telling Twitter how her plan had failed, not too many people found it funny. She even had to send another tweet explaining that it was just a joke, and that they hadn’t planned it:

“just to clarify me and David did not plan that but he guessed it was April fools so jokingly replied, sad that I have to specify that lmao

Whilst Hayleigh and her boyfriend may continue to laugh about this fun they had, it is revealed that 69% of those who took part in an online poll, thought that she should’ve been dumped for it.