This has got to be the luckiest British couple on the planet! These two won $2 million from the lottery for the second time in just two years!

Meet David and Kathleen Long – the luckiest British couple on the planet! 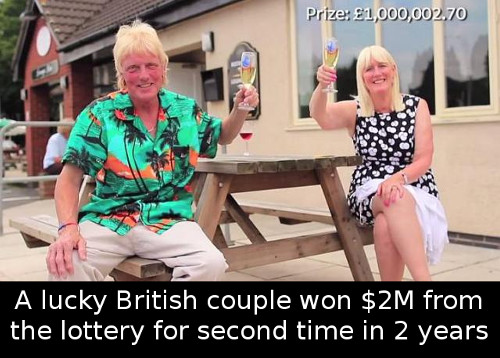 Back in 2013 the Long family, who are residing in Scunthorpe, UK, won their first $1 million from the EuroMillions lottery. Shortly after their big win Mr. Long made a stunning proclamation – that someday they will win again. Somehow he knew that his turn would come again sooner or later. And as it turned out, it was sooner than he and his wife ever expected. Earlier this March David bought some lottery tickets for the EuroMillions lottery and after he scratched them he decided to check the raffle codes on the tickets as well. Sitting in front of the TV in his home David took a look at the riffle numbers several times and realized he had just won another $1 million. At first, he thought he and his wife were the proud owners of some minor prize, but he soon realized their minor prize wasn’t minor at all.

It turned out the nine digit long raffle number on the winning ticket was indeed drawn, so it won them another whopping $1 million for the second time over the course of a couple of years. The lucky couple’s $2 million prize might come as a shocking surprise to most of you, but David and Kathleen Long weren’t surprised at all.

David gushed how he had told Kathleen to take a look at the numbers calmly and that after she had been staring at them for quite some time, she had finally simply replied that David had been right about his prediction that their turn to win another million would come once again.