You probably didn’t know this, but Leo DiCaprio tops the list of the highest paid actors of our time.
Leonardo DiCaprio is known for portraying tortured and troubled characters in most of his movies and we always get troubled by the fact that he gets nominated for an Academy Award, but he doesn’t ever win one. But by the looks of it, he isn’t troubled by how much he earns for a living, because he’s officially the highest paid actor of our time! 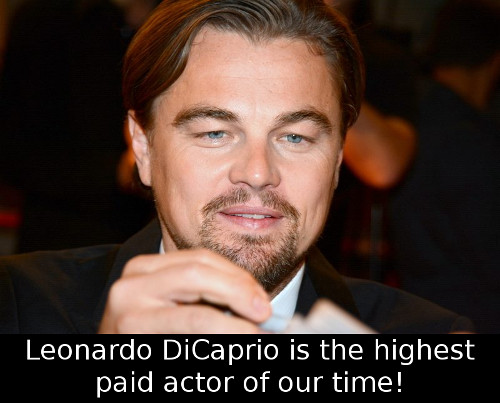 Take a look at what his official IMDb page says about his salary for the past few decades. He took home $75,000 for What’s Eating Gilbert Grape and $150,000 for starring in The Quick and the Dead. He made his first million dollar salary in 1995 from The Basketball Diaries and he earned the whopping $2,500,000 for portraying the notorious Jack Dawson in Titanic two years later. Ever since then his millions have only increased with a slight drop to $2,000,000 in 2011 for J. Edgar. His controversial role in The Wolf of Wall Street earned him nearly $25,000,000, while his biggest salary came in 2010 from Inception. The 40 year old actor got a total of $59,000,000 (yes, that’s right, $59 million!) from portraying the sneaky thief Dom Cobb.

DiCaprio’s networth is estimated to be $220 million, even though he’s a prominent philanthropist and is famous for his fascination with expensive real estate.

Here is a short list of the rest of the highest paid actors and actresses of our time: Seth Rogen, Jennifer Lawrence, Dwayne Johnson, Angelina Jolie, Matt Damon and Sandra Bullock. Everyone’s favorite JLaw earns around $10-$15 per project, the heroic Matt Damon earns around $20 million from some of his big box office movies, while Sandra Bullock managed to score the whopping $70 million for her role in Gravity, even though she was initially promised $20 million.