You might find it hard to believe, but after this pizza delivery man was tricked out of a $8 tip, he actually received the whopping $31,000!

Jarrid Tansey, a pizza delivery man, couldn’t even get a small $8 tip, but he eventually got $31,000 after the whole world learned about his misfortune. 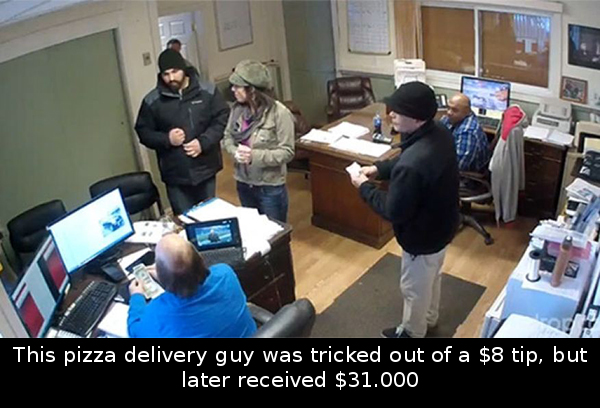 It all started back in January when Tansey went to deliver a takeaway pizza to a dealership company for secondhand cars called F and R Auto Sales. He delivered an order from Pizza Palace for $42 and was paid a total of $50 with a couple of $5 banknotes and a couple of $20s. Tansey thought he was tipped $8, so he drove away. However, shortly after he had made the delivery, Pizza Palace called him and told him to return to the auto shop in order to return one of the $5 banknotes. He wasted gas on his way back and was upset by the fact that he had to drive all the way back to the place just to give back the $5 he thought he was gifted as a tip.

When he got back to the auto shop he demanded an explanation. The owners and the staff members explained that they had indeed called just to get their $5 back, regardless of how ridiculous that sounded. The employees took the owners’ side as well after they heard what the hilarious fuss was about. The misfortunate delivery man handed over his tiny tip unknowing that the whole accident was caught on camera. The video was uploaded on the web and went viral. One of the tons of people that saw it, Amanda Rogers, was so moved by it that she decided to do something about the unfortunate Tansey, so she started a fundraising campaign. People from all around the world donated money and the funds ended up in Tansey’s pocket – a total of $31,000!

Now how’s that for a tip?