If you thought you were the queen of contouring, think again! Paolo Ballesteros, a man of many talents, is definitely the king of contouring. Paolo is an absolutely stunning make-up artist, he’s an actor and hosts a TV show called Eat Bulaga!. He doesn’t use make-up to make himself pretty, he uses make-up to transform himself into praised female celebrities. 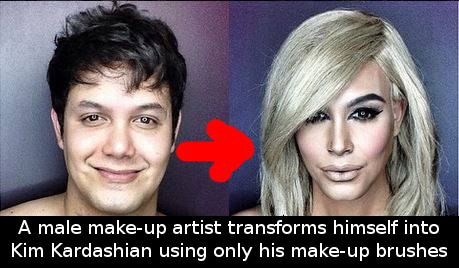 That’s right, Paolo transforms himself into celebrity women. If you head over to his Instagram account Pochoy_29, you will be ah-mazed by the things he can do with a make-up brush! He aces Kim Kardashian’s iconic contoured cheekbones (and even her new blond locks), Kylie Kardashian’s plump pout and even Dakota Johnson’s well-known looks.

Apart from these three, Paolo has portrayed Jennifer Lawrence, Scarlett Johansson, Katy Perry, Angelina Jolie and many more female celebrities. The things he does with some make-up and a plain wig have brought him tons of fans on the social media. He can transform himself from teenage idols like Ariana Grande to old school celebrities like Jennifer Aniston and even to timeless icons like Marilyn Monroe! Seriously, you should head over to his Instagram account and check out his works of art!