On the 14th of March we celebrated Pi Day as well as 136 years from Albert Einstein’s birth. And while we’re on the subject, here’s a fascinating fact about Einstein.

There’s no doubt that he was among the greatest scientists of all times, but that doesn’t mean he got his brains from doing homework and paying attention in class. 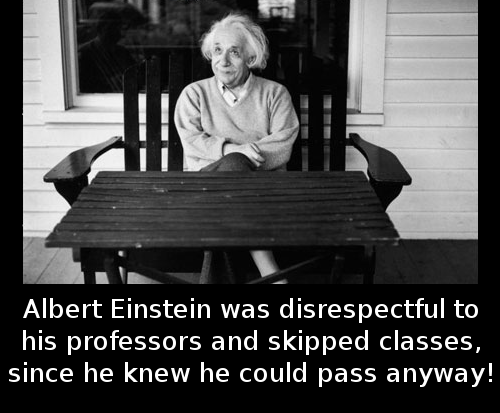 In fact, Einstein often skipped his classes and disrespected his professors. Not only that, but he was absolutely positive that he would ace his exams, so he felt no need to stay in class. Actually, Einstein wasn’t a rebel, he just had great tutors outside his school. From a very early age he was curious about so many things – science, music, maths. His own uncle, Jakob Einstein, taught him algebra, while a medical student named Max Talmud often brought young Einstein all sorts of books – from philosophy to science.

Einstein learned most of his valuable lessons outside class and even hated the way his professors taught him. One of his many popular quotes states that the only thing that was interfering with his learning was in fact his education. Nevertheless, he was still an outstanding student and did especially well in his science and math classes.