More than two decades ago McDonald’s decided to put a McJordan sandwich in their menu consisted of all of Michael Jordan’s favorite ingredients – BBQ sauce (dubbed McJordan sauce), smoked bacon, onions, pickles, cheese and mustard. The McJordan was sold as a limited edition in some restaurants and was also featured as “Big 33” in some other places. 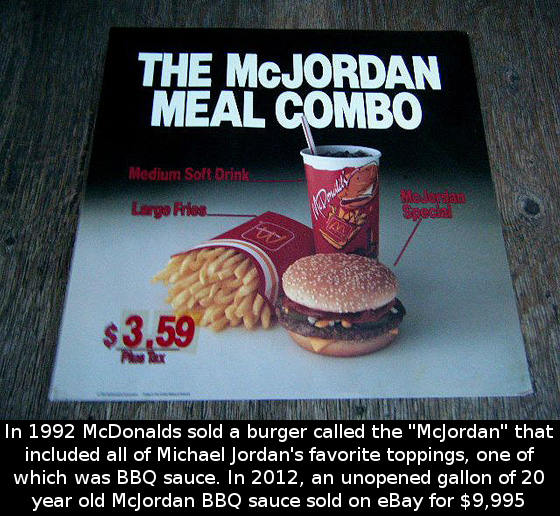 Eventually, the sandwich was removed from the fast food mogul’s menu and all the McJordan sauces were thrown away since they expired back in 1992. However, one former McDonald’s owner, Mort Bank, decided to keep a gallon of the McJordan sauce for himself. He stored it in his basement along with other old McDonald’s memorabilia and back in 2012 he decided to finally put it up for sale. Mort got inspired by the stunt somebody pulled with a 3 year old McNugger, which allegedly resembled George Washington’s face. It got sold for over $8,000.

So, Mort put up for sale his gallon of McJordan sauce on eBay. Stunningly, it was sold for a total of $9,995 exactly 20 years after it expired. EBay decided to keep the buyer’s name a secret, although they stated he was residing in Chicago, Illinois, and he was most definitely not Michael Jordan.