Earlier this year our scientists sent balloons into the stratosphere. One of the balloons, which were launched 27 kilometers into outer space, came back with a company.

The particle, which was attached to the balloon, is so tiny that it’s smaller than a human hair. Scientists from the University of Sheffield and the Buckingham Center for Astrobiology at the University of Buckingham teamed up in order to conduct tests of the tiny object. 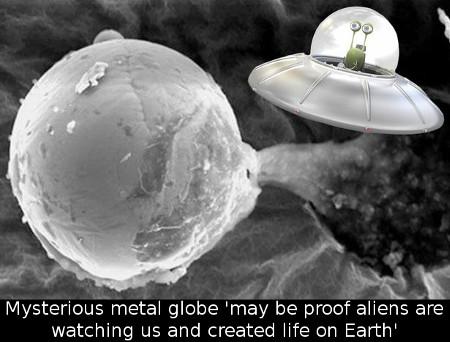 Its structure is formed of titanium and just a hint of vanadium metals surrounds its core. Apart from that, the scientists also found out that there is some sort of biological substance ‘oozing” from the object. The research team believes that the strange substance is some sort of genetic material, which is used by extra-terrestrial creatures. The team is positive that we’re not alone in the universe and that this strange particle is the proof that there are aliens, who are watching us right now. One of their theories is that the object was sent by the aliens in order to create an extra-terrestrial form of life on our planet. Another theory suggests that the object might have come from a comet.
Either way, the team is positive that nobody will believe the alien theory until there’s more solid proof that there are aliens inhabiting our universe.