Ryan Ruckledge is literally dying for his tan. When Brit Ryan was still in school he was often bullied by the other kids, because he was too pale. When he became 15 years old he started using sunbeds on regular basis in order to gain some tan. When he became older he discovered an illegal fake tan injection and started using it. 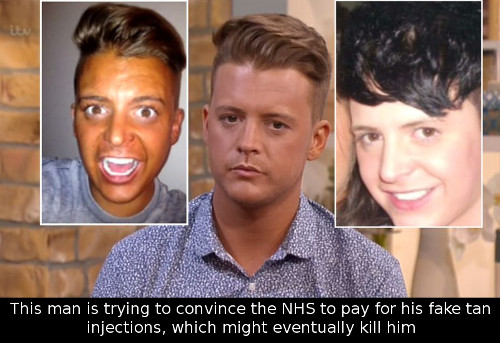 The injection in question is illegal in the UK, since it hasn’t been tested and officially approved by any health-orientated institution. As it turns out, it does have quite the nasty side effects. Ryan has been injecting the substance in his body so often that he’s started experiencing dizziness, stomach pains, nausea, panic attacks. The 22 year old guy has spent a total of £25,000 (nearly $38,500 in USD) on these injections and he’s not planning on stopping, even though they might kill him.
Not only that, but he’s convinced that the NHS has to pay for them. According to him, he can’t go out without a tan without feeling depressed and insecure about his pale skin. He states he has found himself in tons of debts and has missed out many good things in his life. He’s absolutely positive that the NHS has to pay for the thing that might actually kill him.