In 2010 two Nigerian parents living in London, give birth to white baby. The baby girl has been named Nmachi, which means “Beauty of God” in Nigerian parlance. She has blue eyes and blond hair. The couple, of Woolwich, south London, have two other children – four-year-old Chisom and two-year-old Dumebi, who are both dark-skinned and dark-haired. 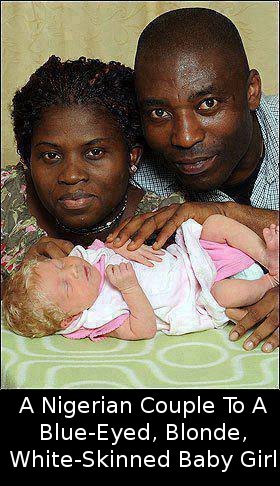 Both Angela and Ben Ihegboro are with Nigerian origination, with dark brown eyes and dark hair. In an interview Ben told the newspaper that he was really shocked when blue-eyed blonde baby was born. The doctors said Nmachi is not an albino and concluded that the baby may have some kind of rare genetic version of the condition.
The 44-year-old parent in an interview said : ”Of course she is mine. My wife is faithful to me. Even if she hadn’t been, the baby still wouldn’t look like that.“ A DNA test proved that Angela and Ben were the biological parents. The doctors said that no matter how long the couple had been in the United Kingdom, their genes couldn’t have been modified to make an albino baby.