We all know our pet dogs can tell the difference between our positive and negative emotions just by our intonation and the pitch of our voices. However, a recent study proved that they can also tell apart our angry faces from our happy ones just by looking at us. 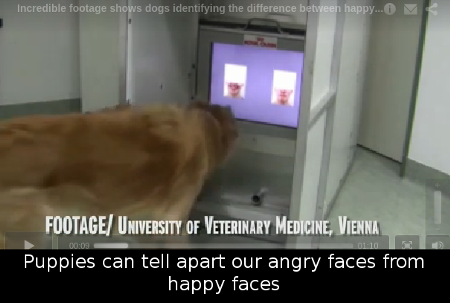 Ludwig Huber and Corsin Muller, both scientists from the University of Veterinary Medicine located in Vienna, Austria, have conducted a study regarding the matter on a group of dogs. Both dogs with and without experience with people were tested and they were divided in two groups – ones, who had to identify negative emotions and ones, who had to identify positive emotions. The puppies were shown a small screen with two pictures on them. One of the pictures portrayed a frowning person, while the other pic portrayed a smiling person. Both pictures were cropped so that the dogs were able to see the faces from the nose up in order not to be picky regarding the person’s smile or lack of it.
The results showed that the pooches managed to successfully identify the correct emotion by pressing the touchscreen on the smiling or frowning person regarding their assignment. The study also showed that the group of animals, who had to identify the angry faces, were much slower than the group, who had to touch the happy expressions, which meant that the dogs didn’t particularly like the negative expressions.