When William Kamkwamba was 14 he had to quit school, since his parents couldn’t afford to pay $80 a year for his education. William, who resided in a small region in Malawi, Africa, was about to starve to death in his small village of 200 people when the drought struck the region back in 2002. However, he managed to beat all odds and educated himself. 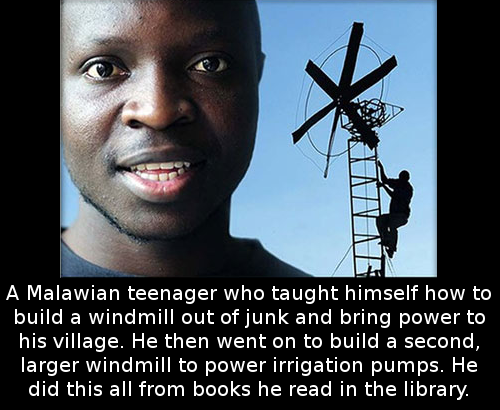 He used books from a local library in order to read all about windmills. He was positive he could construct a windmill himself and thus, bring electric power to his village. It took him tons and tons of old junk pieces like bike particles and plastic pipes, and several electric shocks, but he finally built a prototype of a windmill. His neighbors and even his family thought he was going crazy, because they had never seen a windmill and couldn’t understand why the teenager was spending so much time constructing a strange figure from junk pieces. His 5 feet tall windmill proved to be functional and indeed brought electricity to the village.

However, William didn’t stop there. He constructed another windmill, which pumped water to his family’s farm. He became a local hero and even earned a scholarship for the African Leadership Academy several years ago.