Some people might say that incredible coincidences don’t just happen. However, if you look at this particular couple’s story, you’ll surely think otherwise.

Alex and Donna Voutsinas’ story is truly incredible. They met nearly 15 years ago while they were both working at a hotel in Boca Raton, Florida, US. 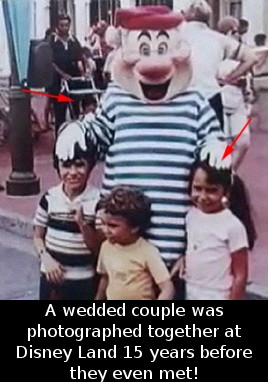 The duo dated for 6 years before they decided to get married. Just a week before the wedding date they were going over some old childhood photographs from nearly 30 years ago. When Donna pulled out a snapshot of her 5 year old self from Disneyland, Alex realized that his own father was taking a stroll in the background behind Donna.

When he looked for his own childhood pictures from his visit to Disneyland he confirmed that the man and the baby in the stroller in the background of Donna’s photo were indeed Alex and his father. Alex was only a 3 year old infant at that time, while Donna was 5 years old. They were both visiting Disneyland with their families, who didn’t know each other at all, and neither did the kids. Alex and his family, who lived in Canada, moved to Florida when he was 10, while Donna and her family used to live near Long Island, New York.