For more than two decades there have been some rumors surfacing every now and then about whether Madonna dated Tupac Shakur back in the days or not. Earlier this March Madonna finally addressed the rumors and shed some light on the case. 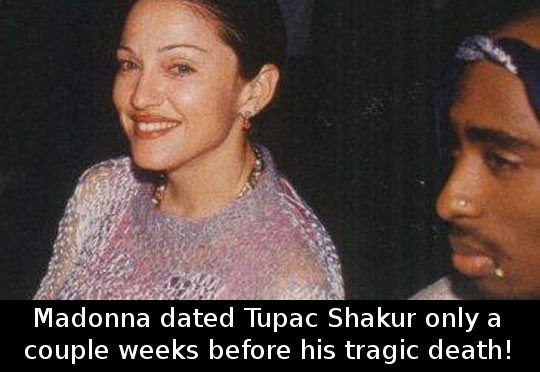 She was explaining how she doesn’t hate Late Show’s host David Letterman and she was asked about her infamous appearance on the talk show back in 1994, during which she dropped more than a dozen swear words. The 56 year old Queen of Pop admitted that she was indeed mad at Letterman that night, but that she was also mad at the whole world during that time. She explained that she was dating Tupac at that time and he had made her more aggressive towards life in general and had made her feel and act “gangsta”.

Furthermore, Rosie Perez admitted that she was the one to introduce Tupac to Madonna back in 1993 during the Soul Train Awards, during which the rapper was escorting her as her date. Perez gushed that all the women at the awards were jealous of her for bringing Shakur along. Three years later the rapper was shot in Las Vegas, Nevada, at the age of 25.