Pets dressed in all sorts of themed clothing are absolutely cute. This little pug, however, has to be the cutest among them all, since his fashion photo shoots went viral overnight.

Nutello was born in October 2014 and he’s currently residing in Herisau, Switzerland, with his owners – Tarik and Melina. Melina dresses Nutello in all sorts of fashion pieces and uploads the snapshots to his Instagram account – NutelloThePug. 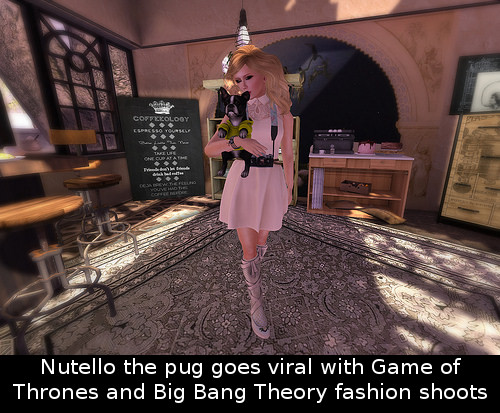 The pug’s photos have gone viral in no time thanks to the hilarious faces he’s making dressed in Game of Thrones inspired outfits or Disco themed sequins. From wigs to sunglasses and even shiny ties – the dog is definitely addicted to fashion and to the camera. His adorable poses and faces show that the puppy clearly adores having his picture taken. He has been transformed in a number of characters – from the nerds from Big Bang Theory to Kid Rock and even to Jason Statham. He has donned the French boy looks, the sultan’s turban and the bodybuilder’s colorful dumbbells. Everybody loves him.

Don’t believe how cute he is? Head over to Nutello’s Instagram – it’s definitely better than yours.