Sarah Michelle Gellar does it again – she takes a sweet little blond character and transforms her into fiercely wicked superheroine.

Gellar’s Buffy days might be long behind her, but she’s donning the rebellious Cinderella character now. The 37 year old actress starred in Princess Rap Battle’s season one as Cinderella and engaged in a rap battle with Belle, who was portrayed by Whitney Avalon. Belle and Cinderella trash each other’s images and beliefs in hilarious rhymes while their “minions” Pocahontas, Little Red Riding Hood, Buttercup and Goldilocks cheer for them. 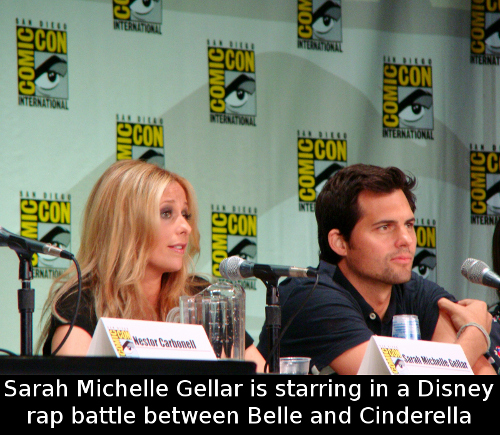 Belle’s Gaston also makes a cameo appearance. The two actresses basically spill out tons of insults regarding the characters’ lifestyles, romantic interests, points of view, friends and everything else. Belle claims Cinderella is shallow and should get back to doing dirty house chores, while Cinderella claims that Disney made an empire thanks to her story and that her rival is mentally challenged and has tea cups for friends. Their hilarious rap battle lasts for just over 2 minutes and it basically trashes everything Disney stands for. The short rap battle was uploaded on YouTube on the 11th of March and already has more than 4 million views.