Khan Noonien Singh, also known only as Khan, was one of the greatest villains in the notorious Star Trek universe. He was originally portrayed by Ricardo Montalban ever since 1967 before he was replaced by Benedict Cumberbatch in 2013. The character was so well developed that he was featured among the top 10 most notorious villains in the film industry. 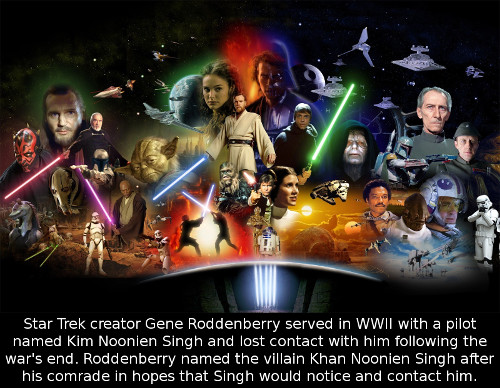 The very first draft of the character’s story introduced him as John Ericssen. By the time the last draft was finished he was an Indian named Khan Noonien Singh. Star Trek’s creator and producer, Gene Roddenberry, had a friend named Kim Noonien Singh. They both served as pilots during the World War II, but Roddenberry lost touch with his friend after the war was over. In a desperate attempt to get back in touch with him, he decided to name his villain after him. Roddenberry was hoping that the real life Noonien Singh might hear the name and look for his long lost friend.
It’s not clear if Roddenberry ever heard of his friend again.