If you thought criminals in South Africa are afraid of getting caught, think again! Two men robbed a South African reporter in front of his camera crew just seconds before he was set to air live – and they did it while the camera was filming. 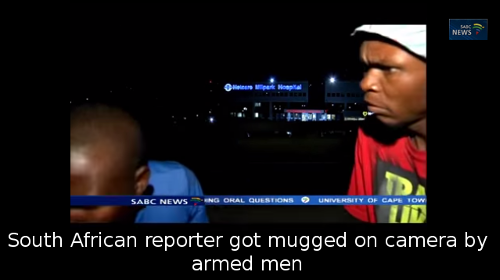 The journalist, Vuyo Mvoko, was standing in front of his camera crew and was about to go live when out of a sudden an unknown man approached him and demanded his phone. When the stunned reported refused to do as told, the robber called another one, who had a gun. The men shouted threats until Mvoko finally gave his phone. The two men also mugged the rest of the crew, stealing one laptop and another phone. The reported and the crew from SABC News were standing just outside the Milpark Hospital in Johannesburg, South Africa, when the accident occurred. They were about to deliver a report regarding the arrival of Zambia’s President at the hospital.

Mvoko expressed his disbelief regarding the muggers’ actions – he claimed they were able to see the light indicating that the camera was on and the SABC News logo on the crew’s van, but these facts didn’t stop them from robbing the people. He also stated that he’s hoping someone may recognize the two men and help the police catch them.