Eva Reyes thought she was going to enjoy her $1 million. Unfortunately, things aren’t going exactly as planned for her. According to official reports, Reyes, a 53 year old woman from Milpitas, California, won $1 million from a local lottery. She had to collect a total of $700,000 after taxes, but that all changed when the owner of the shop, from which the woman had bought the winning ticket, filed a lawsuit against her. 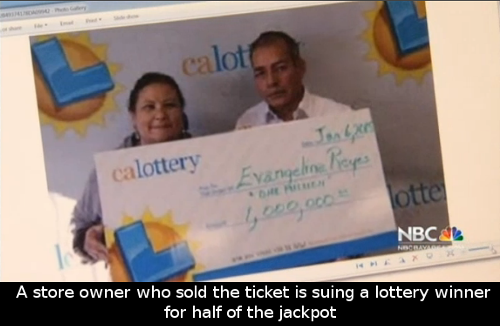 The store’s owner, Laxmi Bhardwaj, claims that Reyes owes him half of the money. According to the lawsuit, Reyes owed him money for lottery tickets, which she didn’t have the funds to buy, so she made a deal with him – to split any potential win in half. The mutual agreement was written on a piece of paper, but the paper read only $50,000. Reyes’ lawyer claims that Bhardwaj added the number 3 in front of the sum in order to collect half of the prize instead of the promised $50,000. Reyes isn’t planning on giving Bhardwaj a dime.

On the other hand, Bhardwaj’s lawyer claims that they have eye witness, who can confirm that Reyes indeed owes $350,000.