The Ohio police have Facebook to thank for the catching of a wanted criminal (and, of course, said criminal’s brain absence). Andrew Dale Marcum’s mugshot surfaced Facebook and Twitter after the Butler County Sheriff’s Office turned to the social media in order to track Marcum down. According to the warrants for his arrest, the man was being wanted for a number of crimes – abduction, domestic violence, safe-cracking, assault, burglary and criminal endangerment. 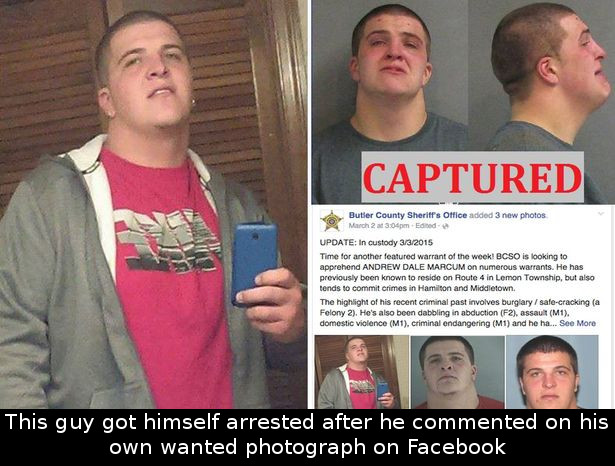 The post sparked tons of likes and comments from other people – most of which were mocking Marcum. This was probably the reason why he decided to comment on his mugshot picture and mock the police in return. The cops posted a picture of a jail cell stating that it was the cell they had prepared for him. They also posted a comment telling him to stay in Butler County, which stated that they had finally located him thanks to his reckless post. Shortly after that the police posted an update on their social media saying that Marcum will have to stay away from Facebook for a while, since he wasn’t allowed any access while being in jail. The Sheriff’s office also thanked the man and everybody else for their cooperation.
What would we do without the social media?