Back in the late 1990s and the early 2000s Ricky Martin was an absolute heartthrob not only for teenage girls, but also for fully grown women. Nowadays one Argentinian guy is trying to use Martin’s good looks in order to find love.

Fran Mariano, an Argentinian reality star, has put himself through tons of plastic surgery operations in order to look like his Puerto Rican idol. Mariano started off with several nose jobs and then underwent a liposuction on his cheeks. 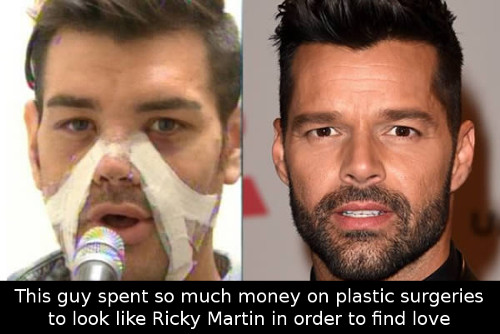 The fat extracted during the liposuction was later implanted in his cheekbones to enhance them. Apart from that his nasolabial and forehead folds were filled with a methacrylate derivative. Not only that, but Mariano also has undergone a total of 3 chin jobs. Overall, the man has undergone more than a dozen plastic surgery procedures in order to look more like the Livin’ La Vida Loca hit maker and less like himself.

The Argentinian is apparently satisfied with the final results so far, but he’s still struggling to find love. Unfortunately for him, there’s no plastic surgery formula, which can guarantee him a love potion effect.