Daniel Radcliffe, once an average blue-eyed British boy, was shot to stardom for his role in the Harry Potter franchise. Even though he was such a dedicated actor that he missed only 2 days of shooting for a whole decade, he wasn’t that easy to work with. 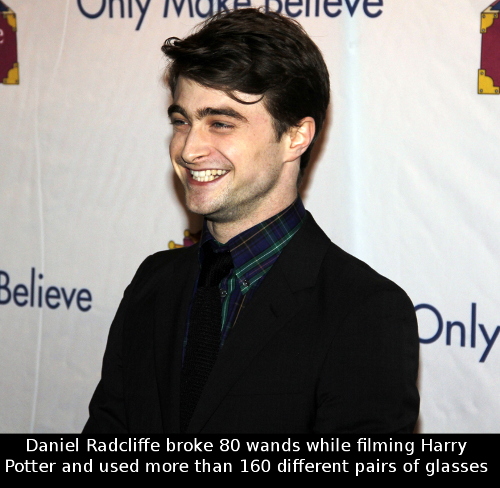 The 25 year old actor reportedly used more than 160 different pairs of glasses while he was filming Harry Potter. Not only that, but he also broke nearly 80 magic wands during the shooting. How could this happen? Easy. Dan actually used the wands as drumsticks in between takes and behind the scenes. In fact, some behind the scenes footage released by Warner Bros. shows exactly how Daniel managed to break nearly 80 wands by continuously tapping them against his legs, against some scenography props and even against some of his co-stars. Just imagine how the props guys felt each time they had to make another identical wand for Harry! They also had to create a total of 40 versions of the famous Salazar Slytherin locket just for Harry Potter and the Deathly Hallows Part I!

Apart from that, Daniel also managed to knock out Harry’s famous lightning bolt scar thousands of times during the filming of the 8 movies!