Home » Did you know that The biggest Kim Kardashian fan spent $150, 000 on plastic surgeries to look like…

You either hate or love Kim Kardashian – there is no in between. And by the looks of it, this man absolutely adores her. Jordan James Parke, a make-up artist from the UK, is so obsessed with the 34 year old Keeping Up With The Kardashians reality star that he has spent $150,000 on plastic surgery in order to look like her. 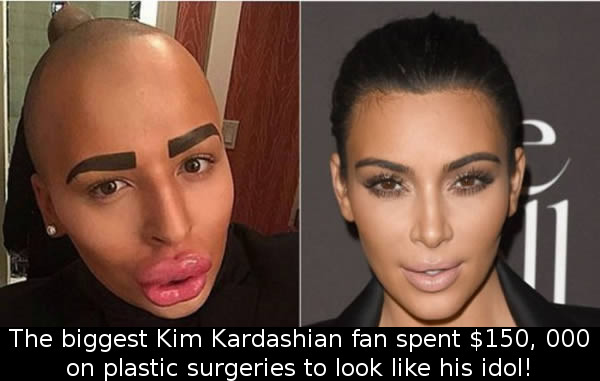 Parke claims that he fell in love with Kardashian’s “flawlessness” ever since he watched just a single episode of the reality show. In a desperate attempt to look like his idol, Parke has spent a small fortune of countless procedures. He has had laser hair removal, permanent eyebrow tattoos, cheek and lip fillers, Botox injections and much, much more. According to his official counting, he has paid for more than 50 “beautifying” procedures. He even spent $700 on Kim’s infamous vampire facial, during which blood drawn from your body is being injected in your face. It might sound crazy, but the man is far from the finish line. He’s currently planning on getting a nose job so that his nose could look more like Kim’s one.

Parke has also spent more than $90,000 on clothing and bags alone.