Rupert Grint played Ronald Weasley in the Harry Potter films. He was chosen for the role partly because he was British. J.K. Rowling wanted the cast to primarily be British. Rupert was a big fan of the book series and couldn’t wait to audition for the part of red headed Ron Weasley. He heard that there was going to be an open audition so he sent a video of himself rapping about how badly he wanted this role. He was successful as he got the role he wanted ever so desperately. 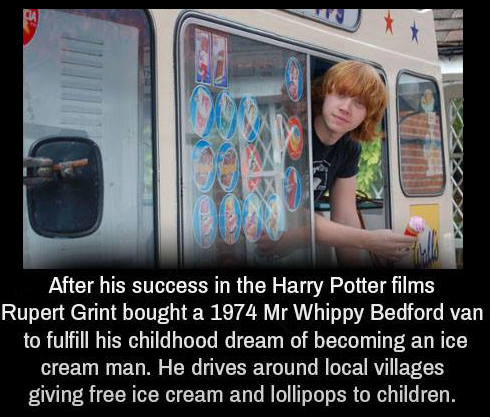 The Harry Potter film series ran from 2001 to 2012 and was one of the most successful movie series ever. After these films were done filming, he went on to act in several other movies and appeared on a few TV shows. But, one thing that is very interested comes from a childhood dream of his. that childhood dream was to become an ice cream man. So, he purchased a 1974 Mr Whippy Bedford van to help him fulfill his dream. He drives around through local villages giving ice cream and lollipops to the children for free. This is absolutely amazing.