An Australian truck driver named Bill Morgan was almost smashed to death during an accident in his truck. He survived the horrific accident but, he was left with a heart condition that required medication. Tragically, he had an allergic reaction to the heart medication and it caused heart failure. Bill was clinically dead for 14 long minutes. The doctors were able to revive him but he went into a coma for 12 days. The family was advised to take him off of life support many times but, they refused to do so. 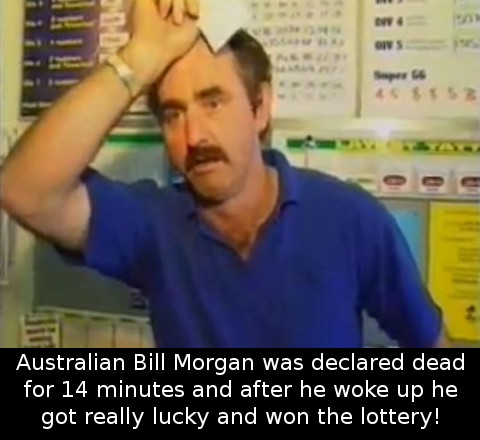 Bill suddenly woke up and upon examination he did not suffer permanent damage. His luck drastically began to change for the good. He got a new higher paying job, and became engaged to his girlfriend. He bought a scratch off lottery ticket from a convenient store. He won a car worth $27,000 on that ticket. He gained media attention very quickly and a local news station decided to do a human interest story on him. They wanted the show to look real so they wanted to film him actually buying the ticket. That new ticket he bought surprisingly was a $250,000 winner.

It goes without saying this man had fate on his side and there was a bigger reason for keeping him alive.