Steve Jobs enlisted Microsoft to be the very first, third party applications software manager for Macintosh. He already had a concern that the would try to copy his ideas into a personal computer user interface. Steve Jobs made sure that Microsoft would promise not to send any software that used a mouse until one year after Macintosh had their first shipment sent. 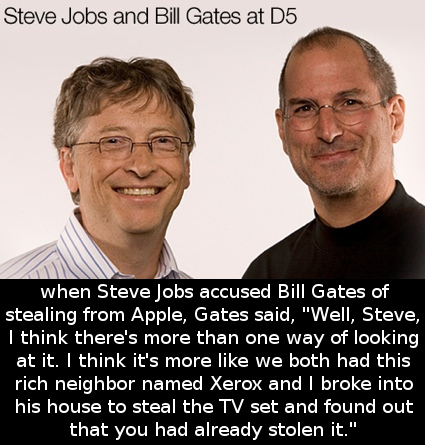 Microsoft assigned a man who loved Apple dearly to a top secret project. This man then would ask questions that he really didn’t need to know anything about. There was no reason to care about the internal systems unless you were attempting to make your own Version of it.

Bill Gates told Steve Jobs that he believed they were going to try to create a clone of the Mac. He wasn’t too worried about it though because he knew they couldn’t make it nearly as good.
Then came a version of windows that was eerily similar to Macintosh. Steve Jobs called a meeting right away with Bill Gates saying “You’re ripping us off”.

Then Gates replied by saying “Well, Steve, I think there’s more than one way of looking at it. I think it’s more like we both had this rich neighbor named Xerox and I broke into his house to steal the TV set and found out that you had already stolen it.”
The lawsuit against Windows was lost due to a technicality.