Crocodiles and snakes are not the most threatening animal in Australia. The new threat is a wild pig. Well, this is true if you’re camping. A campground in Western Australia was where the crime took place over the weekend. A wild pig was the culprit.

The crime? Drinking 18 beers that were left out without being secured properly. Just as anyone would after guzzling down 18 beers, the pigs confidence was on overload when it decided to start a scuffle with a cow ! The cow was clearly upset because, he started chasing the little pig around a car. 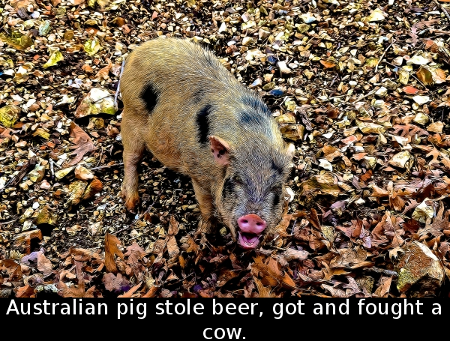 A visitor said “In the middle of the night these people camping opposite us heard a noise, so they got their torch out and shone it on the pig and there he was, scrunching away at their cans.”
The pig must not have felt very well later on in the day because he was spotted sleeping under a tree trying to get rid of his hangover I’m sure.

Feral pigs are usually invasive pets in most areas of the country, this story serves as a reminder to keep your open alcoholic beverages properly secured when you are camping. It could has ended worse, it could have been a kangaroo.