An infant miraculously survived a car crash in a river in Utah, US.

According to official reports, a 25 year old woman was driving towards her home in Springville, Utah, on the night of March 8th this year. Her 18 month old daughter was in the car with her when the woman crashed into the Spanish Fork River located nearly 80 km south of Salt Lake City. 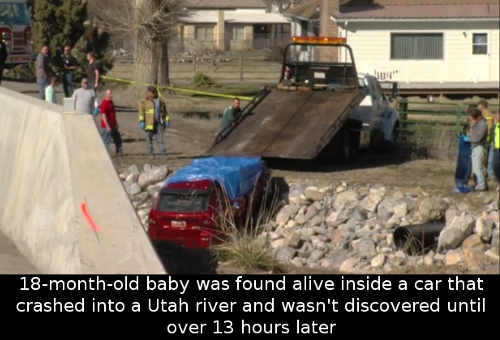 The car fell upside down in the river and the local authorities found it around noon the next day. The strange thing was that even though the woman had passed away in the road accident, her baby was still alive in the nearly sunken car. It was immediately hospitalized along with the people, who went inside the river in order to help the infant. They were treated for hypothermia before they were released from a local hospital.

A resident living near the Spanish Fork River area thought he had heard something that evening, but was unable to see anything. The reports state that the baby miraculously survived 13 hours in the icy waters while being stuck in the upside down car.