2014 had it’s fair share of memories that nobody will ever forget. From the Mike Brown case to Bill Cosby being accused of rape. Those events were both at the front of the headlines everywhere. One milestone was reached by a rapper from Houston Texas. And he’s worth knowing about.
His name is Viper and he is a producer, entrepreneur and entertainer from the South. Just in the year 2014, Viper produced 347 albums. Each album averaged 15 songs. That can be difficult for some to believe. 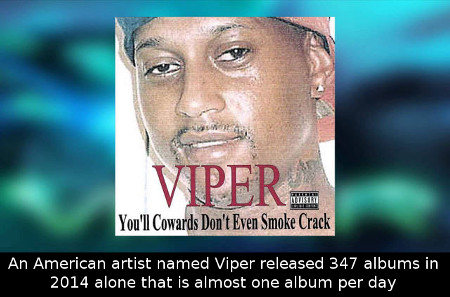 Vipers government name is Lee Carter and he’s been making music since he was a small child. In 2008 people started paying attention to him when he released a mix tape called “You’ll cowards Don’t Even Smoke Crack” and was viewed more than 600 thousand times on YouTube.

He is known for his dedication to his work and flat out hard working nature. He’s done it all on his own from writing his music to producing his music videos and creating his album art. Another thing that deserves to be noticed are his album titles. They are often full of explicit words and harsh meanings. Having made so