An Australian university student tried to look like Kylie Jenner and failed big time.
Brittany Forster, a 24 year old student, tried to get the trendy full pout of Keeping Up With The Kardashians’ 17 year old Kylie.

Unfortunately, things didn’t go exactly as planned. Brittany bought a lip enhancing device manufactured by CandyLipz in hopes to get the fuller lips she so desperately designer. 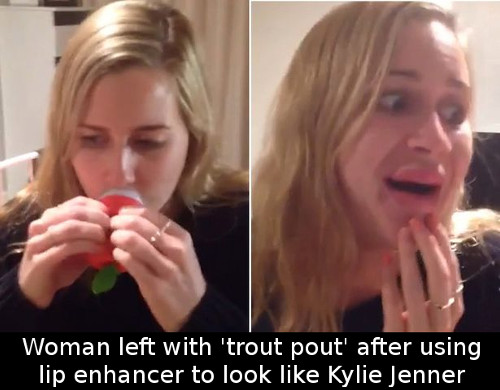 Unfortunately, the lip enhancer didn’t work out the way she hoped it would. The device created suction over her lips and made them huge over the course of several minutes. It also left nasty cup-like marks over her upper and lower lip that looked like big bruises. Overall, the entire final effect was nothing like the effect Brittany was looking for. Fortunately for her, CandyLipz claim that the cup-like marks will go away after a week.
Kylie’s lips have been discussed numerous times by the media. Since she’s only 17 years old, she can’t get lip injections (although she’s a Kardashian, so she might as well have). Thus, many people believe she’s frequently using lip enhancing devices like the one by CandyLipz in order to maintain her full pout.