There are tons and tons of ordinary people out there impersonating Madonna on various gigs and shows and there are even some celebrities imitating her. This guy, however, is not your average Madonna impersonator.

Adam Daniel is a 31 year old American, whose sole purpose in life is to look, act and sound like the Queen of Pop. When he was 15 years old he found his mother’s copy of one of the singer’s albums and he couldn’t stop listening to it over and over again. 12 years later Adam has spent a fortune trying to look like his idol. 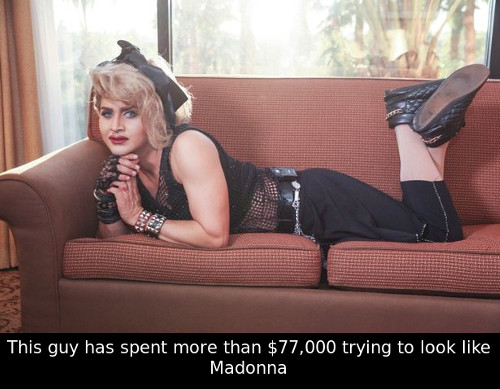 Over the course of the past decade he has spent more than $77,000 on injections, make-up, clothing and all sorts of image altering procedures in order to achieve the 56 year old singer’s looks. He is the most famous Madonna impersonator in the US and he has even managed to get free passes to her concerts.
Unfortunately, Adam is spending every single dime he has on his procedures. He’s had countless fights with his family and close ones, but he sees every job, every possession and every cent as something trivial. He’s simply a material “girl”.