Once upon a time Mattel decided to sue Aqua over their popular hit single “Barbie Girl” and lost the case. Back in the not so distant 1997 Aqua released the song “Barbie Girl”, in which they mocked the popular blond toy, her boyfriend Ken and everything they stood for. The song and its video clip portrayed Barbie’s plastic lifestyle as superficial and showed Barbie as nothing more than an artificial bimbo, who likes to party. 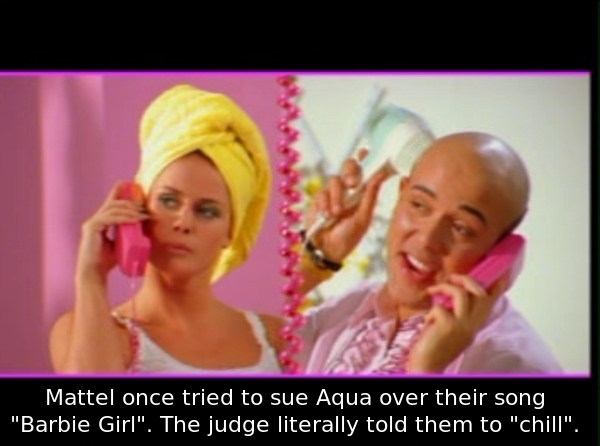 Mattel got extremely irritated over the fact that Aqua was mocking their high end product, so they decided to sue them. The lawsuit stated that the band was infringing copyright and was bringing down Barbie’s image. Unsurprisingly, Mattel lost the case. Surprisingly, the judge literally told the company’s board to “chill”. Alex Kozinski, the judge who was assigned to the case, ruled that the song was a parody and Aqua were protected by the US Constitution’s right to free speech clause. According to him, Mattel had it coming for them, since they had created a cultural icon – something that wouldn’t always have a positive effect over the masses. The judge also stated that Barbie has spawned worse reactions than Aqua’s one since the 1950s.