David Homes is the stunt double for Daniel Radcliffe (as Harry Potter) for the first 6 parts. He had suffered serious spinal injuries for the Harry Potter film. While he was rehearsing, there was an explosion and Homes fell right into it pretty bad. 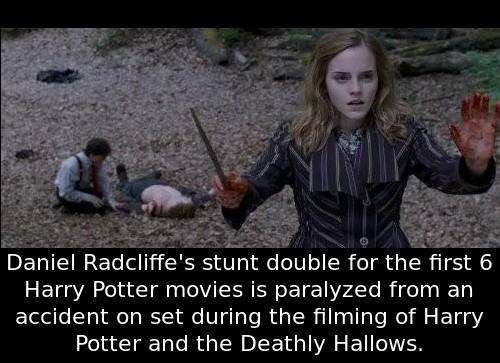 He stayed conscious and said : “ I can’t feel my legs”. He was taken immediately to the hospital. He hoped to return to work soon, but the doctors informed him that will stay paralyzed for life. After this unpleasantness accident ,Daniel Radcliffe and Tom Felton visited Homes in the hospital to show him respect. That visit excited him. Despite that David Homes being bound in a wheelchair, he took a driving licence for a specially-modified car and set up a production company with two friends. He is also an ambassador for the Royal National Orthopaedick Hospital and he continue to raise money for the Royal National Orthopaedick Hospital.