The rag doll Annabelle was featured in the book “The Demonologist” and was the main character that gave popularity to the investigators of the paranormal Ed and Lorraine Warren back in 1970s.

The story of the doll is quite unique. Annabelle was brought in the flat of two medical students, Donna and Angie, as a birthday present. Being pleased with the doll, one of the girls placed it in her bedroom beside her bed. It wasn’t long before the doll started behaving really suspiciously. The two flatmates noticed that the doll was moving on its own. They sometimes found it in rooms in which they had never placed it. Eventually, they discovered that blood, coming as if from nowhere, was dripping from the doll. 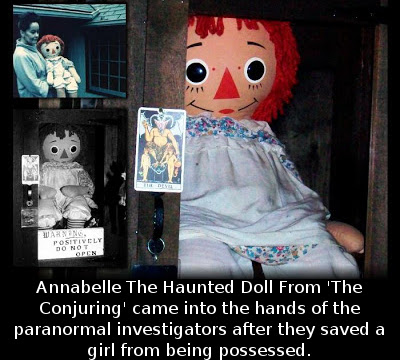 This was when the girls contacted a psychic who was brought to the house to investigate the peculiar case of Annabelle. The psychic discovered that Annabelle was actually a young girl that once lived in a property that stood where the new apartment building was later erected. The dead body of the 7-year-old Annabelle was discovered in the field near Donna and Angie’s apartment block several decades before the doll came into the girls’ possession. The medium then assured the girls that Annabelle felt comfort in their company so she decided to possess the raggedy doll.

The story unfolded when the doll became aggressive towards Donna’s friend Lou who received a mysterious scratch mark on his chest. The man was left alone with the doll he resented and little Annabelle could obviously feel his rancor towards her.

However, after the deep analysis of Ed and Loraine Warren, who the girls eventually contacted, the paranormal investigators came to the conclusion that the doll was not actually possessed by an evil spirit but rather manipulated by it. The spirit wanted to gain recognition of its existence and did not actually attach itself to the doll. According to the paranormal researchers spirits can only possess living human bodies. The Warrens took Annabelle with them when they left the girls’ home because they wanted to investigate further. If Donna and Angie hadn’t got rid of the doll, the evil spirit would have probably infested one of them.

Eventually, the Warrens placed Annabelle in a locked container to prevent it from moving around but the terrible entity attached to the doll is supposed to still be there.

If you want to see the famous Annabelle you can visit the Warren Occult Museum in Moodus, Connecticut in which she is currently displayed.